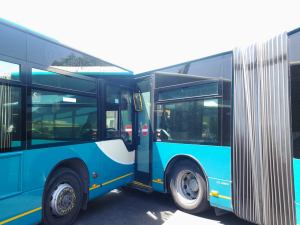 By Gerry Cowie, Written in Summer 2011

Beware of the buses, launched with such pride!
If you get on one, you’ll be taken for a ride!
Shout “Arriva! Arriva!” and a bus might come along.
But you must watch out lest your journey goes wrong!

The one on the front is the number you need;
Not the ones on the side! It’s confusing indeed!
When I got on a bus Ghal IMsida – not far –
I ended up being transported to Naxxar!

Such a lengthy bus journey I had to endure.
Though when it was done I’d been twice round Gharghur –
A place which I never had been to before
Since of its location I had never been sure.

The bus drivers change over at Gnien Argotti;
Makes the garden itself appear strangely spotty!
For in a spot on each bench sits a man from a bus.
“There’s no chance of being lonely”, they say, so join us!”

Now the buses of old were decrepit and dirty
And ‘twas in the drivers’ blood to be rude and get shirty.
But now they are civil and all nice as pie,
And if you offend them, for tough penalties they’ll try!

The brain of a bus driver is quite a mystery,
Though it seems it’s just an empty space to me!
So here’s a conundrum which I have seen:-
A car either side with the bus stop between;

You’d think that the driver could easily afford
To stop by the space so the passengers might board;
But no, he was not there in order to please,
So past a parked car we were all forced to squeeze!

And that was not all, for more trouble was due:-
When I went to the bus stand at Golden Bay too,
The thirty-one bus – well, it just never came;
Yet the X31 – which doesn’t exist – was a different game!

To Bugibba this bus took me, with its bendy middle,
Winding its way like a difficult riddle.
On arrival I did not feel much better there,
Squeezing onto an eleven to heaven knows where!

The bus went like the wind – I tried holding on tight,
But the pole I was holding came off – what a fright!
The handles on the rail slipped; my knuckles took the toll
As the back of my hand slammed straight into a pole!

And, Oh the shame! As I went to leave;
A sight that very nearly caused me to grieve:-
A pregnant woman with her child, all with blonde hair,
Made to stand in the front with their folded push chair!

In bingo, they say thirteen’s “lucky for some”
So I laughed when I saw two number thirteens come!
I wondered if this was an Arriva joke
Or a number twenty six which in half had broke!

Don’t ask for help on a bus – you should know better
Than to ask the driver which bus goes to Valletta!
The reply may come back, much to your consternation:-
“I am bus driver – mhux information!”

Bring back the yellow buses, which once were all green!
Though dirty and old, with those drivers, obscene,
At least they went from A to B – not bad to worse;
Whilst the new ones take a trip around the whole universe!

This website uses cookies to improve your experience while you navigate through the website. Out of these, the cookies that are categorized as necessary are stored on your browser as they are essential for the working of basic functionalities of the website. We also use third-party cookies that help us analyze and understand how you use this website. These cookies will be stored in your browser only with your consent. You also have the option to opt-out of these cookies. But opting out of some of these cookies may affect your browsing experience.
Necessary Always Enabled
Necessary cookies are absolutely essential for the website to function properly. This category only includes cookies that ensures basic functionalities and security features of the website. These cookies do not store any personal information.
Non-necessary
Any cookies that may not be particularly necessary for the website to function and is used specifically to collect user personal data via analytics, ads, other embedded contents are termed as non-necessary cookies. It is mandatory to procure user consent prior to running these cookies on your website.
SAVE & ACCEPT